The World that Dev Protocol Aims for

Economic activities are built on top of many real world activities. These activities need investments to realize future growth and profit. Dev Protocol is a decentralized technology that fairly evaluates various activities that have not received an economic evaluation and realizes their autonomous distribution and sustainability through P2P trading and reward distribution.

Individuals produce value through activities. Dev Protocol offers market, staking, and reward distribution features for tokenizing these activities and trading them through P2P. When activities are tokenized, the following is achieved.

Staking is a new form of trading money that uses the inflation mechanism. Through staking, the sustainability of users’ activities is secured, and users receive value at zero financial cost. This is a mechanism that provides profit for all properties that had previously been released for free or through other indirect monetization mechanisms. Dev Protocol aims for a total value staked that surpasses donation activities that have been taking place through legal tender.

Dev Protocol transfers the formulation of its policy, which serves as the guiding principle for its governance, to the community so that it can be updated depending on the circumstances. Users can freely propose a new policy through the protocol. In order for a policy to take effect, approval must be granted through a vote of staking users(a.k.a. stakers). A policy can be related to a decision on the inflation rate and other aspects of the ecosystem. The current policy is here.

The market serves to provide assuring identity by certifying an individual’s activity on the blockchain. A market is created for each authentication target, and the community can propose the opening of new markets.

As a premise, ownership of a user’s activities is certified to belong to the user in Dev Protocol. This differs from the model employed in existing web platforms, in which the platform owns the user data, and separates the ownership and utilization of properties. A property can be used infinitely through the application layer built on top of Dev protocol.

By authenticating an external account that expresses ownership of the activity on Dev Protocol, users can define their activity as a “property” on the market and certify that they are the owner of the property. When authenticating a property, the user pays a commission in DEV that has been defined by the policy, and the commission that has been paid is instantly burned. Users can authenticate multiple properties and connect them to multiple markets.

An owner of a Property receives a market reward based on the total staked of the property.

The flow of DEV in the protocol can be summarized through the following lifecycle. For simplicity, the owner of a Property is listed as an “activity participant,” and a third party who receives some form of utility is listed as a “user,” although a user can be classified as both.

The total amount of rewards is determined (dynamically or statically) based on the policy regarding the inflation rate for DEV. The current policy is here. Through the protocol, DEV is newly issued, burned, staked, and fluctuates based on demand.

Many incentives are built into Dev Protocol so that all users can receive profit without encroaching on each other’s interests. There is no decisive theory on the interaction of these incentives, and our hope is for the community, including stakeholders, to constantly propose improvements. In Dev Protocol, indices with uncertainty are accepted from external sources as part of the policy. And, the current policy is here.

If a staking user gets some staking perk, those perks will be provided via the application layers.

Dev Protocol is comprised of the following 14 main contracts. 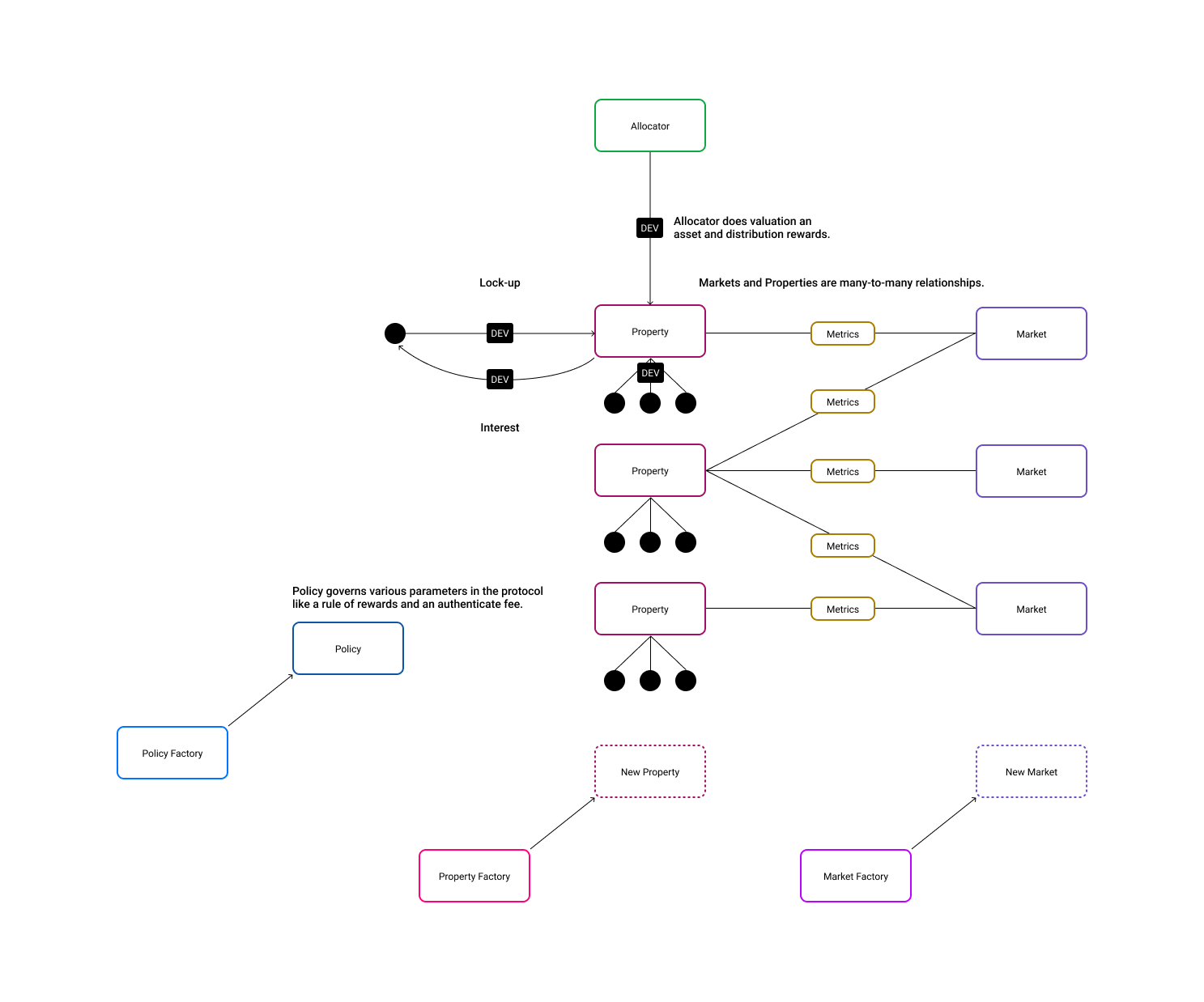 The Market Contract represents a specific group of properties. The properties handled by Dev Protocol can be defined through the authenticate function.

When you implement the authenticate function, strongly recommended to verify the sender is associated with the Market Contract. To verify, please create a function to set the associated Market Contract address.

The schema is an array-type JSON character string that explains the significance of the arguments that the authenticate function receives for authentication. The maximum for these arguments is 5, in addition to the address of the Property Contract. An example is presented below.

The authenticate function always handles the 2nd argument as the unique ID. Accordingly, values that cannot secure uniqueness should not be assigned. The following schema is an incorrect example.

And the following schema is a correct example.

The getId function receives an argument as a Metrics contract address and returns the authenticated asset name. For example, that return value is like dev-protocol/dev-kit-js.

The Property Contract represents the user’s property group. This is a token that conforms to ERC20 and can be transferred to any email address.

A Property Contract in its initial state is not assuring assets (e.g., GitHub repositories).

When the Property Factory Contract generates a new Property Contract, a portion of the total supply will be allocated to the Treasury Contract.

Tokens assigned to the Treasury Contract will be used by the Dev Protocol developers team for more flexible use case development or returned to the Property Contract creator.

The Metrics Contract represents the association between Property Contracts and Market Contracts.

When a user stakes their own DEV in a Property Contract. This function can only be executed from the deposit function for DEV.

Bypassing the Property Contract address to stake in and the amount of DEV, the Lockup Contract stakes the DEV. Stakes can be added as many times as desired.

By staking DEV, users can receive some utility from the corresponding Property Contract owner. Staking continues until the utility is needed, increasing the scarcity value of DEV.

A cumulative total reward amount at a time of staking (accumulation of the return value of the calculateMaxRewardsPerBlock function of the Allocator Contract according to the elapsed block) is recorded and used for the withdrawal reward calculation.

An amount of reward is the same regardless of the Property Contract of the staking destination, but it changes all as the staking ratio changes. Therefore, the Lockup Contract keeps track of the "cumulative sum of the per-staking remuneration" and updates the value every time staking is added or removed.

The following variables are used to calculate a reward amount for a staking user.

The calculation formula is as follows.

The r / t in the above formula shows the "cumulative sum of the per-staking remuneration."

The amount of interest that can be withdrawn per user can be calculated by subtracting the value of total_interest when the user's last staking or withdrawal from the latest total_interest.

When a staking person gets a reward, a value of total_interest per user overrides with the latest value. In this way, a withdrawable interest amount does not exceed the maximum amount that one person can withdraw. This is exemplified below. r, t and s are not considered for simplicity.

This formula holds only when the staking amount of a staking person is constant. Therefore, it is necessary to update total_interest and snapshots the withdrawable interest amount when executing the withdraw function of the Lockup Contract.

All or part of the DEV that the user has staked in the Property Contract and the full amount of interest that can be withdrawn will be withdrawn.

Calculate and return a value per block of a total reward given to all users.

Take a total staking amount of DEV at a time of a calculation and a total number of authenticated assets. This function acts as a proxy for the rewards function of Policy Contract. Correlation between arguments and return values is defined by Policy.

The Winthdraw Contract plays several roles for managing the amount of market rewards that can be withdrawn.

Withdraws the market rewards for the Property Contract. The executor withdraws the amount that can be withdrawn when it is called.

The following variables are used to calculate a reward amount for a Property holder.

The calculation formula is as follows.

In this way, a withdrawable reward amount does not exceed the maximum amount that one person can withdraw. This is exemplified below. Policy.holdersShare(r / t, t) are assigned as i for simplicity.

This formula holds only when the balance of a Property holder is constant. Therefore, it is necessary to update i when executing the transfer function of a Property Contract.

The Policy Contract represents the policy of Dev Protocol. Dev Protocol assigns the formulation of uncertain indices to the community and updates the indices based on the circumstances.

Anybody can freely propose a Policy Contract. However, for it to take effect, it must be approved through a vote of staking users. The number of votes will be the staking amount for each Property Contract per user. The vote is completed by executing vote for the Policy Contract.

The contract address of the current Treasury Contract.

Those Contracts are a contract that makes the state of the other contracts persistent. Its responsibility is to exclusively maintain the state and getter method without waiting for implementation.

DEV is the ERC20 token that serves as the key currency for Dev Protocol.

Previous
Getting Started
Next - Protocol
Tokenomics 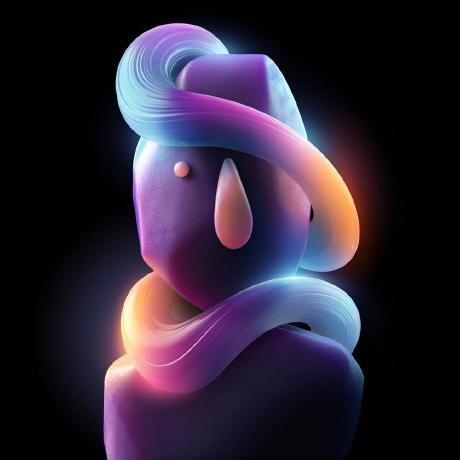